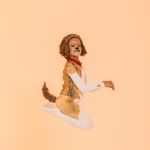 My name is Ruby Spicer. I'm 9 years old, and I auditioned for LCB for the first time in November last year. I want to share my experience with other young people.

Let me take you back to the auditions.

Round one….. I arrived at the Dance Attic studios at 8:30am (along with my mum) as I didn’t want to miss my 9am start. Already there were lots of girls – some taller than me, others (only a few!) a bit shorter than me and others the same height as me. My mum chatted to some of the mums and I realised that some of the girls had come from quite a long way. Then at about 8:50am a very friendly voice (I now know to be Anne’s) said “hello girls, we will be starting shortly but don’t look nervous, smile, it’s going to be fine.” As we registered we were given numbers to pin on our leotards – my number was 18. At 9am Anne took us to the small studio to do some warm up exercises. After that we went to the big studio; then it was time to audition. When I saw the judges I just FROZE for a second but thought “I have to do this”. Before we started the judges told us to do our best and that if we make a mistake just carry on, which was very nice of them. We started with easier moves – first, second and third position. Then it got harder but more exciting. We had to do jumps, hops, leaps and turns. At the end of the audition we went to meet our parents in the small studio to find out who got through to the second round. It seemed like a very very long wait then I heard my number called out – I had made it to the second round! I was happy and relieved.

Round two…. The second round of auditions was later that morning. I went back to the big studio with the girls from my group who had also made it to the second round. There were also some girls from other groups. The dance moves in this round were just as tough as the first round but just as fun. This time I wasn’t so nervous.   I had to wait a few days to find out if I had made it through to the third and final round of auditions. A few days later a letter arrived from LCB – I had made it to the final round. To prepare myself I was practicing smiling and doing different dances.

Round three….. This was the final round. Again I arrived pretty early (with my mum). I saw lots of worried faces, including mine. We all had the same numbers as round one and two. After the audition we were told that we would be told by letter if we had got through to the LCB main company or the tour company. The letter finally arrived. I remember I had friends round that day. My friends and I were upstairs and suddenly I heard my mum screaming in excitement. I ran downstairs and we read the letter together – I had got in!!!!!!!

That was the auditions over – a mix of nerves, worried faces, fun, excitement and kind and friendly staff.

Casting day………Two weeks later was casting day. This was the day we tried out for the different roles. I recognised a lot of the girls and we all got chatting. Some were saying how scared they were and others scared and excited.  I was thinking to myself, “I really want to be ………”
Erico and Gemma again reminded us to do our best and not be worried if we make a mistake. We did all sorts of jumps, leaps, 1st position, 2nd, 3rd, 4th and 5th. We did the routines in pairs and individually. At the end of the casting we went to meet our parents in the small studio. There we were all told that we would find out in just over a week what role we had been given. Before we left to go home, Erico gave a very wise speech to the children and the parents. “Just remember that every role is important, don’t be upset if you don’t get the role that you really wanted, the show can’t be a show without all the roles…..”

Cast list…. My mum received the email 9 days after we went for casting day. I was quite chuffed when I found out I was going to be Sugar the family puppy!!!!!!! I started imaging doing jumps, leaps and hops on stage and what costume I was going to wear...

And now the rehearsals……. The rehearsals started just after New Year. When I arrived at the Dance Attic studios for the first rehearsals, I met the other family puppy and all the boys and girls in the Brown family. We were going to spend a lot of time together.  Everyone was really nice and the older children were particularly nice to all the younger children. Hard work started right away – warm ups and different dances. A few days before the rehearsals I found out that I had been selected for the photo shoot….. Exciting!!! The pictures were going to be used for publicity. To prepare for the photo shoot I had my costume fitted. I remember literally having goose bumps with excitement when I saw my costume – it was amazing and cute.

The photo shoot….. I arrived at Jet studios at about 11am. The studios looked so amazing, I felt like I was a super star. There was a professional photographer and I had make up done by a professional makeup artist and my mum was there to help out with my hair!!! The day was long but it was such a wonderful experience and Lucille did a wonderful job getting all the children to do different poses and moves.

Back to rehearsals…. We are now just 5 days away from the first show. As it’s getting so close, we have been going for rehearsals nearly every day. A few days ago some ballet teachers came to watch the rehearsals, my teacher came. I could tell from her smile that she enjoyed it.

I will end here for now. I will tell you all about the performance after next week…….. Keep checking.