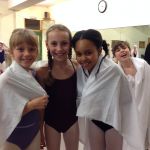 One more rehearsal before the Summer cast of LCB2 sets off on tour this weekend.  We will have spent five days rehearsing a 30 minute production of Nanny McPhee to perform in care homes and special needs schools across London and the South East.

I am back in the Dance Attic where I auditioned nine months ago along with hundreds of children.  Now there are only 12.  Such a small group is really fun because you get to know everyone quite well, including the older children who I might not have much to do with in a real production or in my dance classes.  After such a short time we are all really good friends.  The other great thing about our small group is we all have plenty to do in the production and some dancers have more than one part.

Yesterday was very exciting.  We were fitted with our costumes and used our props for the very first time. We rehearsed for three hours before trying our costumes on, though half the time we were playing around with the props or studying the array of outfits hanging over the barre and deciding amongst ourselves which ones we wanted...... of course nobody got the costume they had set their hearts on!

My favourite scene is the one when the naughty Brown children don't want to get up so they paint "measles" on their faces.  Instead of using face paint we use circular stickers but we had to practice with luminous yellow stickers as Ryman's had run out of red!

Can't wait until the weekend and to get on the tour bus..... haven't let on I get car sick!!

See behind the scenes with the LCB team. Read our latest news, hear about events and get the low down on everything that's going on.