First rehearsals were scheduled to start on 5th January – I couldn’t wait!!!  Then we got the schedule through, and I wasn’t down to dance that day – so I HAD to wait!!!  Over the Christmas break, I think I watched Nanny McPhee what felt like a hundred times. It is such a great film though!  I wonder if Emma Thompson will come and see our production? I would love it if she did!.....

Unfortunately I also caught a virus and grew about 2 inches all at the same time, which took its toll on my knees for some reason!!  Anyway, back to rehearsals, so on 12th January I was due to rehearse scene 4.  I was so unbelievably excited to get started and to learn the choreography – this is the scene where Nanny McPhee bangs her magic stick and her magic dust dances around her.  It starts out with 4 of the magic dust – Joe, Elliot, Mukeni, and Laurence lifting Nanny McPhee.  Unfortunately for the boys, I’m not so graceful once air-born(!) and with my dodgy knees all taped up it took me quite a few attempts before we got it right!  It was great to get to know some of the other dancers and to see how Erico and Gemma worked.

The following week instead of dancing, I was called for the photo shoot. It was one of the best experiences of my whole entire life!! I felt like a superstar because I had my own hair and make-up stylist (I could get used that!) I got to wear my costume for the very first time – I loved the material of my coat – it was beautiful and the colour seemed to change with every movement.  Apparently my hat was made by a famous designer and I think it was the perfect icing on the cake.

After I was transformed into Nanny McPhee I went downstairs into the studio where I was introduced to the lovely Johan, who was the photographer. I then was shown where to stand in the studio and was given directions as for what they wanted me to do. The first shot we took was very simple where I had my feet in fifth (or together if you’re a non ballerina) and my stick in one hand. But because I was on pointe, it wasn’t the easiest to balance (so we had a lot of pictures with me falling over!) This one photo took about half an hour to master and I found the process of capturing the perfect picture quite exhausting. After an hour had passed of different poses and angles it was now time to get glittery! This resulted in Sophie and Lucille repetitively throwing sparkles and glitter behind me while I (tried to) hold my pose. 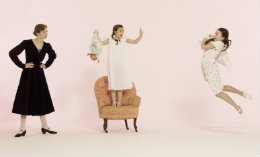 After all the glitter had been thrown we had to gather it up and start all over again. This process happened at least 7 times, therefore eating another hour into our studio time. It was now about 12.00 and I was allowed my break while the Brown children burst onto the scene.

Throughout the course of the day I did many different scenes with many different characters, all in various moods and emotions, and by the end of the day I was ssssoooooo tired. We had time for one last cheesy grin with the costume designers and the hair and makeup artist before we packed up (including hoovering the last flurries of glitter on the floor) and went home. The whole day was unforgettable and I cannot thank LCB enough for giving me such a wonderful memory that I will treasure forever.