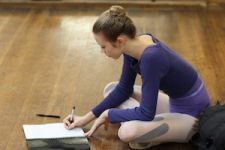 Hi – it’s Annabelle (aka Nanny McPhee!!) Here’s a little background info into the auditioning process for anyone wanting to give it a go (you should!!).  As Mum is my walking diary (she told me to write that!) she said the LCB auditions were coming up, and as this is my last year for LCB – I’m 14 now – I really wanted to give it a go.  This would be my third time of auditioning (Snow White and A Little Princess before), so I had an idea of what was to come! Even so,  I have to say, on the day I was nervous – the butterflies had butterflies – even though I know the experience is great fun, I just wanted to be a part of this production so badly!

On audition day I turned up with my Nan – abandoned by my Mum (not really, it was my brother’s birthday that day, so Nan came with me instead!) Then I got my lucky number and was faced with hurdle no.1 – how to get it pinned on without stabbing myself!  Luckily I was wearing a red leotard and Anne was there to help me out (she’s like a mum to everyone in the company, and you’ll hear about her a lot in my blogs).  In the warm up room I chatted with some of the other girls there, and of course, warmed up.  When we were in the audition room, I glanced anxiously at the audition panel – but they all looked really friendly, so that relaxed me.

We worked through some exercises and I felt the panel was looking at how we performed each one.  I got most of them right, but I know I made couple of mistakes, but I thought to myself – just keep going and performing.  At the end of the audition was the long wait to find out if we had been recalled to the next round (well, it felt like a long wait, but honestly it wasn’t that long!!)  As they called out the numbers of the girls who were recalled, my heart was racing.  They got closer and closer to my number and then………465……..ME!!!  I was so happy!

The next part of the audition was fairly similar to what had gone on before, except Erico taught us some of the choreography from Nanny McPhee – this gave us a little glimpse of what the ballet would be like, and that made me want to be a part of it even more.  It’s surprising how fast the auditions went. Because I enjoyed myself so much, it felt like it had only been a few minutes before we had to leave.  I have to say, I was really quite tired by the end of the day – a good sign that I had worked hard.

Then came the long wait…………

Woke up, waiting, went to school, still waiting, got home, still waiting, went to sleep, still waiting, woke up, waiting…….anyway – you get the picture! It was in fact only about 3 days until my letter arrived through my door but I was at school when it did, and I had given Mum STRICTEST instructions NOT TO OPEN IT, because I wanted to be the first to know.  I don’t think I have ever run home from school more quickly, because Mum had text me to say it had arrived.  There it was……and I held it in my hands for a moment before opening it, scared, nervous and excited all at the same time.

“We would like to invite you to the Final Audition”……….YES – I had made it through.  Basically reaching this stage gave me the opportunity to either be selected for the Nanny McPhee company, or for the LCB2 touring company. I have done the tour before with Snow White, and I really loved it – it’s such a great experience!  I was over the moon!

2 weeks later……..quite late in the day, as my audition was at 3.45pm I stood in front of Anne again with my lucky number – 465 – and lined up to go in.  In the audition we did some technical exercises, but most of the audition dances were from the choreography that Erico had put together so far.  I performed to the audition panel as well as I could, and Gemma was there (our ballet mistress) – she took the class and Erico was also helping out.  It went as well as I thought it could, but I did get some moves wrong, so I was quite confident but also a little nervous as I really wanted to be a part of the production.

So began the next long wait………..it was almost unbearable!

The letter arrived on a Wednesday.  I was walking back home from school with my friend Natasha (who, by the way, has danced with LCB in Jayne Eyre).  We got through the door, and there was Mum standing with a letter in her hand.  We were all so excited (Natasha included, as she knew how I felt).  I couldn’t open it quickly enough……..and there it was………”Congratulations! We are delighted to offer you a place in London Children’s Ballet.” Mum and Natasha started crying and I screamed because I was soooooo happy!  Let the fun (and work) begin!