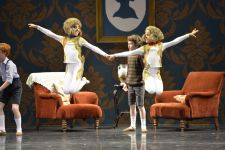 I’m back! I promised to tell you all about the performances but first the dress rehearsals.

The dress rehearsals…… On Tuesday morning, I got up much earlier than I do when I’m going to school! But it didn’t bother me, I was so excited about going to the Peacock theatre. As my mum was a chaperone for the week, we arrived at the theatre at 9:30 am. We were shown to our dressing rooms – I was sharing dressing number 7 with 12 other girls, including “Baby Agatha.” Action started at 10:30am – first we rehearsed with a piano and after lunch we rehearsed with the orchestra, how cool is that! The day finished at 8:30pm. I didn’t get home until 10pm!

On Wednesday morning we got to arrive a little bit later, at 10am. We had our first rehearsal at 10:30am, with the orchestra and in full costume (just not the makeup). At lunch time we had to be very careful not eat in our costumes. We had another rehearsal after lunch, this time we got to wear make up. We also had photos taken. The last rehearsal was at 6:45pm. There was a small audience during this performance. I was lucky to be asked to do a short speech to the audience. I got to tell them about being Sugar and my experience with LCB. The day finished at about 8:45pm. Luckily I was staying in the travel lodge which is not too far from the theatre so I was in bed quite early, but not before eating loads of fried chicken and chips (Érico and Gemma did say to get lots of rest and food!!).

And now the performances……The first performance (Thursday 12pm)…. We performed in front of almost 1000 school children and teachers. Before the performance, I got to talk the audience again about being Sugar and my experience with LCB. Mukeni, who had the role of the Butler and Magic Dust demonstrated the mimes – this is when you show the audience what some of the mimes mean so that they find it easier to follow the story during the performance. The audience were absolutely fantastic; they cheered and clapped at the end. I think all the cast members did a wonderful job.  I really enjoyed doing my jumps and dances. At the end of the performance we went to meet the audience in our costumes. We had lots of pictures taken with the children and they gave us high fives.

The premiere performance (Thursday evening)……. The only way to summarise is, Emma Thompson was there!!!! Before the performance there was a lot of excitement in dressing room 7; everyone wanted to do their best because we knew Emma Thompson was going to be watching. Érico and Gemma came round to see everyone and wish us luck and just reminded us to do our best and if we make any mistakes to just carry on. Again I got to talk to the audience about my LCB experience and being Sugar. It was nice hearing the audience laugh when I told them how my mum had burst my eardrums when she screamed so loud on the day we found out I had got into the LCB Company. The audience also laughed when I showed them my paws and tail. The performance went very well. The audience seemed to clap for a very long time at the end. Afterwards Emma Thompson came on the stage and talked to us. My mum was in the audience but I didn’t see her from the stage. She told me afterwards that she got to meet Emma Thompson and even managed to get a picture with her!!

Friday and Saturday performances….. We did 2 performances on Friday, the first to over 40 different charities. The theatre was absolutely packed again. The second performance was in the evening. My dad and my brother came to watch. I was able to spot them in the audience. My brother stayed awake the whole time – this tells me he loved the performance!! My BFF from school also came with her mum.  Shhh…… she got to meet some of the cast (don’t tell Anne…). On Saturday we did 2 performances, one in the afternoon and the other in the evening. Both shows went very well.

Sunday performances (the final day)…..The first performance was at 12:30pm and it went just as well as the others. The eighth and final performance was at 4:30pm and finished at 6:30pm. I can’t believe how much energy everyone still had after so many days of dancing. My mum and dad were in the audience and I saw them from the stage. My mum had the biggest smile on her face the whole time……. My Nan, my aunt, my uncle and my cousin also came to watch. At the end when we did the finale, all my emotions just came over me and I couldn’t stop crying. Poor Rin (aka Spice), he had to give me lots of cuddles!! I was sad that my time with LCB had come to an end. All the time I had been on stage I kept thinking I want to do this forever and now it had ended.

My time with LCB from that day in November 2013 to the final performance in April 2014 was the most amazing time of my life so far. 6 months ago there is no way I could stand up in front of a 1000 people and talk to them, I am now a confident person. Through LCB I have learnt to do a lot more – I can now do split runs with bent legs and I can express myself more when I’m dancing. I made friends with Amelie (aka Baby Agatha) and lots of other people and I even got to stay in a hotel for a few days!!!

Thank you LCB for giving me such a wonderful opportunity. I loved being a part of the 20th Anniversary and loved being Sugar.